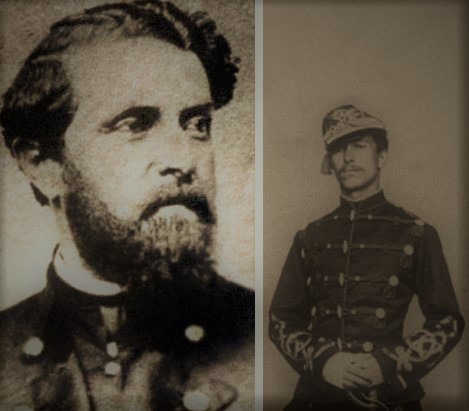 Among them were General George Pomutz (left) and Captain Nicolae Dunca (right).
George Pomutz (1818-1882) enlisted in the Union Army in 1861 as a lieutenant in the 15th Iowa Infantry. In August 1864 he was offered command of the 15th Iowa Regiment, being promoted to the rank of lieutenant colonel. In 1865, in recognition of his military merits, the U.S. Senate awarded him the rank of brigadier general. After the war, he was appointed to the position of United States consul in St. Petersburg (Russia).

Nicolae Dunca (1837-1862) enlisted in the Union Army in March 1862, being appointed captain in the 12th New York Infantry Regiment. He lost his life in the Battle of Cross Keys on June 8, 1862. He was buried at Perkey’s Farm, Cross Keys, Virginia, and his remains were later transferred to the Staunton National Cemetery in Shenandoah Valley, Virginia.